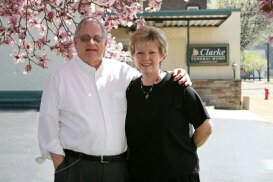 Donald W. Clarke joined the firm in October of 1963 after graduating from the Cincinnati College of Mortuary Science.

The Funeral home was managed by Donald T. and Thelma V. Clarke until September of 1977 when Donald T. Suddenly passed away after which Donald W. Clarke became the manager and chief operator of the funeral home.

Donald W. along with his mother as a consultant managed the funeral home after his father passed away. Don's wife joined the firm in 1992 as office manager.

In November of 1998 the funeral home merged with the Altmeyer Funeral Homes of Ohio, West Virginia and Virginia.

Thelma V. Clarke passed away in October of 2003 after which Don and Cheryl managed the day-to-day business of the funeral home.

About Us
Our Staff
Why Choose Us
Testimonials
Contact Us